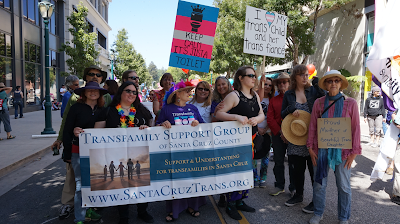 Pride Santa Cruz 2017 was June 4th, and Transfamily Support showed up in force! We had our largest contingent ever in the parade with not only us parents but several of our kids who showed up and marched with us. This was a huge step forward for these kids. We can all be so proud of them!

After the parade the festivities of the day continued with music and food and information booths. Transfamily had a booth which was very popular this year! Our outreach felt more productive than ever before. We passed out hundreds of cards, gave away hundreds of bracelets, and answered a barrage of inquiries from kids and parents about our services.


We shared our booth with The Intersex and Genderqueer Recognition Project (IGRP) whose mission is to help non-binary identifying people who want to change their document gender markers to allow for a third gender option complete the difficult gauntlet for doing so.

The IGRP's presence at our booth was quite popular especially with the youth at Pride. Having them there with us created more opportunities for conversations between us from Transfamily and some of the youth who shared their stories of parents not accepting them as they truly are.

Pride was a blast! The parade seemed to be the longest ever with Dykes (and allies) on Bikes, marching bands, cheer leaders, the library drill team, faith groups, and several groups from the Diversity Center including the Triangle Speakers of which I, as a parent,  am a panel speaker. After the parade there was a stage with great music and dancing. There were several food trucks; lots of information and sales booths; and a ton of freedom to be who you are!

Video of Transfamily in the parade 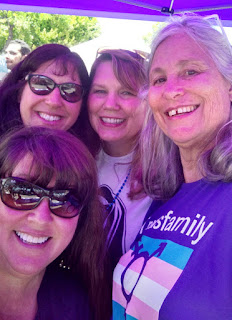 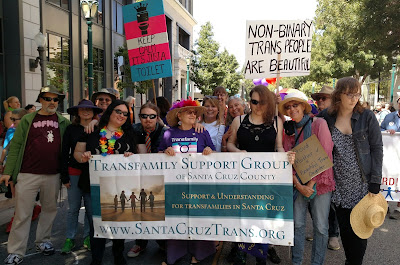 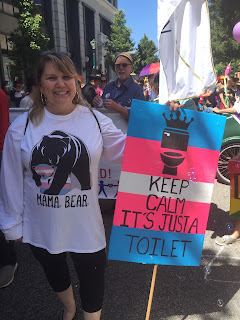 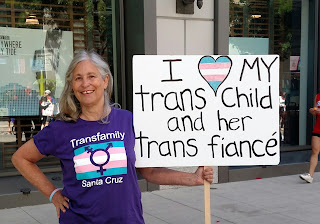 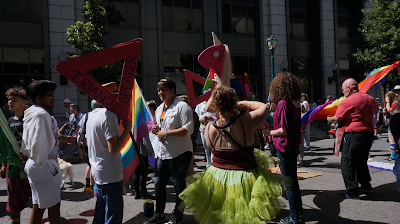