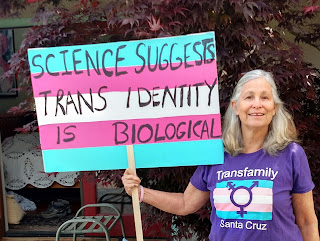 Today April 22th, 2017 was the National March for Science and I wanted my participation to talk about the science surrounding transgender identities. I made a dual sided sign which I proudly held high as I marched along with 4000 other attendees, a large crowd in our relatively small town of Santa Cruz. 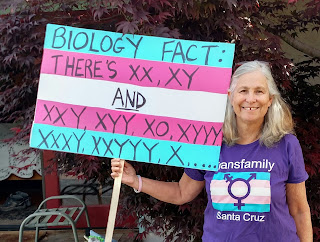 The other side of my sign was a statement about chromosomes being more than just XX and XY. This was admittedly about intersex people who may or may not not also be transgender, so putting my words on top of the trans flag was a bit misleading. However, there is a connection between intersex conditions and transgender identities that I wanted to subtly bring up, which is that, though unproven, some scientists believe transgender to be a form of intersex in the brain. A prominent and long time science researcher on trans and intersex, Dr.Milton Diamond wrote in 2011 about this (in some rather dated language)

"Actually from my own clinical experiences, my own experimental research, and from the findings of others I conclude that transsexuality is a form of intersexuality…. I believe that transsexuals are intersexed in their brains as others are or might be more obviously so in their gonads, genitals, hormonal character, receptors, enzymatic or chromosomal constitution. And it is this brain intersexuality that biases the person to assert his or her gender identity.”

Here is a link to the full article he published that the quote was excerpted from
http://www.hawaii.edu/PCSS/biblio/articles/2010to2014/2011-ethical-considerations.html

Dr.Milton Diamond has contributed a significant amount to our understanding of gender, transgender, and intersex conditions. He has been studying and publishing papers on gender since 1950, and is also one of the people who did a study with fraternal and identical twins looking to see if there is a genetic component to being transgender. He located a set of identical twins who were adopted away at birth, and who were raised in different countries, spoke different languages, and both transitioned at around the same time, and both talked about experiencing being similarly transgender.

Dr. Diamond is also the person who brought to light the truth about the John\Joan experiment aka David Reimer story in 1997 as well. David Reimers life is fundamental to our current understanding about gender being an internal identity not something that can be changed by assignment.
https://en.wikipedia.org/wiki/David_Reimer

There are 3 more articles I want to share on the science of transgender identities:
This one is from Harvard doctoral researchers who summarized 6 known scientific studies "The Science of Transgender Identity" http://sitn.hms.harvard.edu/flash/2016/gender-lines-science-transgender-identity/
This one is from Scientific American "Is There Something Unique About the Transgender Brain?" https://www.scientificamerican.com/article/is-there-soming-unique-about-the-transgender-brain/
This one is from PBS "Is Gender Identity Biology Hardwired?" http://www.pbs.org/newshour/bb/biology-gender-identity-children/
Finally, my somewhat oversimplified summation of the science:
*Gender is formed in our brain not our genitals. As fetuses we all get 2 separate hormone baths the first to create the sex of the fetus, the second to gender the brain and many things can cause the 2 not to match.
*The structure of transgender brains more closely resembles the structure of the brains of non transgender people of the gender they identify as.
* There are many more chromosome combinations then xx and xy (and most people don't know what theirs are.)
* Intersex people are empirical proof of the reality of transgender existence not the "exception".
* Gender is non-binary.
* There is evidence of genetic components to transgender identities with so far as many as 6 genes associated with gender identity.
* A transgender person does not have a mental illness and the most effective treatment is allowing transition.
* Being trans is not a choice. It is science. However the ways we are allowed to express our gender is a social construct.

If I could only have figured out how to say all that on on my sign for the march!
Posted by Andi at 8:52 PM