Why Are There so Few Trans Male Role Models?

I recently finished my 3rd installment blog post on trans role models. That last one focused on film and TV, but I was troubled because I could find almost zero trans men. I have been wondering why? Then I found this post a couple of days later written by Aydian Dowling a trans man whom I have written about before. He's a male model who was competing for the cover of  Men's Health Magazine. He got enough votes for a close second place. He's a business owner with a clothing line for the trans community called .5cc and he's also a trans activist. I will cover trans fashion models as role models in an upcoming blog but again, there are very few trans men doing fashion modeling as opposed to trans women. This might be more of a height issue.

In this article, linked below, for NBC news Aydian talks about his thoughts on why trans men are missing from public visibility and conversation. 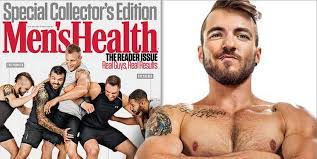 10 Handsome Men Who Were Born Female

Here's a link to a good book about the experience becoming a trans men considered a must read. Jamison Green is a trans activist and educator

Becoming a Visible Man by Jamison Green
Posted by Andi at 10:31 AM