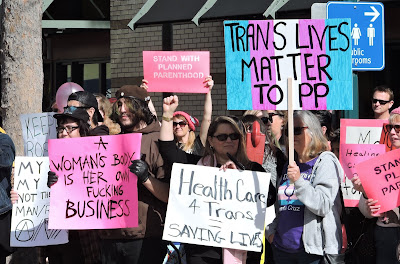 
Transfamily Family Support Group of SCC was there representing our support in honor of the vital role Planned Parenthood historically played and continues to play in the trans story throughout the United States. Over several hours during the rally many people shared their stories of how Planned Parenthood made a difference in their lives and/or the lives of those they love. In my efforts to preserve Planned Parenthood as a critical resource for the trans community, I took to the mic to represent our families and our children. You can hear what I had to say in the video below (starting at 1:15) before the camera goes around the block to capture the smaller of the two defunding groups present in Santa Cruz that day.


Planned Parenthood is a stand-out provider of trans-specific, health care throughout the country, and in many communities it is the ONLY healthcare option for transgender people for hundreds of miles around. A significant portion of trans people use Planned Parenthood for their hormones and other medical services.   Planned Parenthood is staffed by trans-friendly, expertly-trained medical professionals who can provide trans care in a safe environment.  Thank you, Planned Parenthood, for working to provide healthy lives for our trans children. Transfamily Support Group of SCC supports you and will do what ever we can to ensure your organization endures these baseless efforts to defund what so many know is a priceless resource in our country's medical care system.