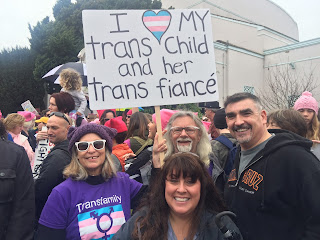 Jan 21, 2017. The Women's March on Washington Santa Cruz event was spectacular! Official estimates indicate upwards of 15,000 marched, approximately 1/5 of the 64K population.  The Transfamily Support Group was there as a small but excited group showing our support for our trans kids.

For several reasons, I wore a purple pussy hat instead of pink. Purple is the color representing anti-bullying. I also wore purple to highlight the array of options in gender expression.  To include my trans daughter and her trans fiancé, I wore purple to raise awareness that having or not having a vagina does not a woman make. We do not have to "match" certain physical expectations to be women (or men).

At one point in the march my husband and I stopped and faced the marchers from the sidewalk holding our sign and wearing our Transfamily T-shirts. We received an outpouring of thumbs up and hugs from the crowd. Our little band of marchers even served our ongoing efforts to provide community outreach as a parent in need of the Transfamily Support Group learned we existed by seeing us participate.

The highlight of the march for me was when we passed the second floor balcony of Santa Cruz Planned Parenthood where so many trans folk in our community receive fabulous care.  The doctors and staff were on the balcony waving to the cheering crowd below. As I marched by holding up my sign they all turned their attention my way and gave me 2 thumbs up. Tears sprang to my eyes.

The event was concluded by famous singer/songwriter Holly Near leading the crowd in protest songs. Little Santa Cruz represented BIG that day, and we were there.