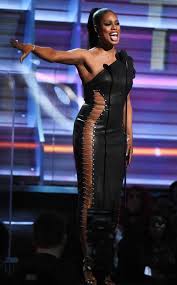 At the Grammy awards, Feb 12, 2017, transgender actress Laverne Cox (Netflix's Orange is the New Black and CBS' Doubt debuting Feb 15, 2017) was on hand to introduced Lady Gaga and Metallica. When Cox took to the stage, she challenged everyone to "Google Gavin Grimm and #StandWithGavin." So, who is Gavin Grimm?  He is a transgender teen who's ACLU case fighting for bathroom access for transgender kids at schools will be heard before the US Supreme Court at the end of March 2017.


CLICK HERE to read and watch 3 videos: Laverne Cox at the Grammys PLUS Gavins Story


Cox's bold call for awareness came a day after disappointing news for the trans community from the Trump administration. On Feb 11, 2017 the new administration withdrew support for lifting the federal injunction against President Obama's directive providing bathroom rights for trans students under Title IX. The new administration's position on transgender bathroom rights may effect the Supreme Court's hearing of Grimm's case since the Title IX protections were the defense for the case. 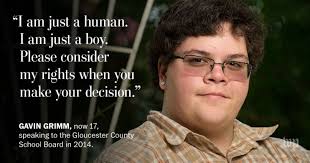