This is the 3rd installment on my multi part blog letting you know about the large number of trans people out there who can be role models for our kids and for us as parents who worry about our kids opportunities and discrimination. Look back at recent blogs for parts 1 on artists and musicians and part 2 on authors and a large list of books for all ages by, for and about trans people.

In this installment I will introduce you to some trans role models in theater film and television. My daughter was into acting before transitioning and was in many theater productions, some professional and 1 professional movie role. Now that she has transitioned she has lost interest. It could be coincidental but I think it could also be because it can add a layer of fear for her to audition now as a girl or even possibly to play a transgender role. But maybe she will find more courage in the future... 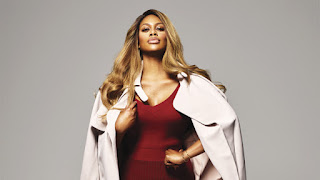 Probably the most well know transgender actor/actress is Laverne Cox, a trans woman who plays a transgender woman in prison in the Netflix show "Orange Is The New Black" which just finished its 4th season and was she was nominated for an Emmy for her role. This show is not appropriate for kids. More Recently Cox was cast in the new 2016 CBS legal drama "Doubt" in which she plays an ivy league educated smart attorney. Debuting Oct 20th Cox will play Dr Frank N Furter in the Fox network remake of "The Rocky Horror Picture Show"

Jackson Millarker is the first openly transgender child actor to appear in a major television series. Age 8 he played the role of Tom in "Modern Family" season 8 episode 2. titled " The stereo typical day" which aired in Sept. 2016


Amazons Emmy and Golden Globe winning series "Transparent" premiered in 2014 and is now starting its 4th season. It is the brainchild of Jill Soloway whose own father came out as an older adult as transgender much like the shows lead character. transparent stars Jeffrey Tambor as Maura, but the show also has more than 20 transgender people in the cast and crew and another 60 as extras. Transgender actresses Alexandra Billings plays mentor Davina, Trace Lysette plays Shea a yoga instructor and Hari Nef plays Grittel. Jiz Lee who identifies as genderqueer plays Pony (season 2). The first ever transgender director (male) Silas Howard joined the show in season 2. Transgender woman Zachary Drucker is an associate producer.

Lana and Lily Wachowski are famous film directors, screenwriters and producers. they are siblings, both are transgender. Their credits include the "Matrix" series, a major box office success and award winner, "Speed Racer" based on the cartoon, "Cloud Atlas" and "Jupiter Ascending" and the 2016 Netflix series "Senses 8" which also has in its cast transgender actress Jamie Clayton playing the role of a transgender woman.

Most definitly not for kids is the 2015 indie film "Tangerine" which features 2 transgender women Kitana Kiki Rodriquez and Mya Taylor playing transgender
sex workers. This is not the kind of role models most people want for their kids but the adult trans community has actually loved this movie so if your child is an adult you might want to watch and recommend it to them. Rated R

Andrea James is a transwoman film producer, writer, director who produced the all transgender Vagina Monologues and she also created the very well known and early website for transgender people called transexual roadmap in 1996. http://www.andreajames.com/

Alexis Arquette, from the famous Arquette acting family had small parts in the 1994 Oscar winning film"Pulp Fiction", the TV show "Rosanne" and the movie "Down and Out in Beverly Hills". Alexis began questioning her gender again in recent years and began to consider herself genderqueer before her death in 2016 at age 47

Candis Cayne is the first transgender woman to play a recurring transgender role on network TV. This was in the drama "Dirty Sexy money" 2007-2009, where she played a transgender woman in an affair. Candis started as Choreographer and a drag queen performer in New York in the 1990s. She was also part of the cast on the  2015 reality show "I am Cait"

Finally I want to throw out a few names of  transgender people who have been in reality TV or documentaries not as actors but as themselves:
Jazz Jennings, Chaz Bono, Janet Mock (host of SoPOPular interview show on MSNBC and author), Caitlyn Jenner, appearing on "I am Cait": Chandi Moore, Jenny Boylan,(author), Zachary Drucker, Jen Richards, Kate Bornstein (author), Ella Giselle,
Posted by Andi at 3:59 PM