I Dislike Change, Yet Change is the Heart of Being Transgender 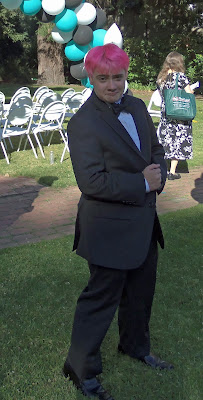 Even before I had a chance to process this rather dramatic visible change, I had someone ask me if I liked it. Was I okay with him changing the color of his hair? I laughed to myself and thought, my god. My son has changed his gender. Changed his name. And so much else. What do I care about a little hair color?

It has been three years since my son’s transition.

He is always changing something whether it’s his clothes - sometime five times a day - or his favorite video game or his favorite food. To be honest, he’s always been like this, even as a toddler. But since his transition, it’s taken on a whole new meaning and increased by an order of magnitude.

At times, I have tried to tame his changes so that he would be protected from stares, words, or ignorance. Every time he changes something visible in his life, I worry how it will affect him and how others will handle it. Will he be loved and accepted?

Mostly I try to flow with the changes, although I have struggled to keep up. Let’s be clear: I am a creature of habit. I do not like change. I like everything to stay the same: same hair, same clothes, same food. I want to stay under the radar. So whenever my son makes a change, I notice and feel it. Whether it was clothing or sports or the kind of music he liked.

So when he came home with pink hair I thought I would struggle.

But I didn't! Instead I fell in love with it.

At the moment I saw him I had an epiphany. I finally realized my son will always be changing - in every aspect of his life. It’s just who he is. He has learned to experiment with his identity, try new things and be okay with the reaction from the outside world. A rather courageous approach to life. Something he might not have learned had he not been transgender.

And I totally dig my son and all of his funky changes. He is such a unique individual, from wanting to wear a bow tie to having pink hair. My son is awesome! I am making adjustments to who I am as well. Now, instead of trying to get him to hide under the radar, I am going to celebrate his uniqueness and let him enjoy his life.

My son had to be someone other than who he truly was for 11 years. It’s time for him to be who he is.

Posted by Heidi Koronkowski at 8:10 PM